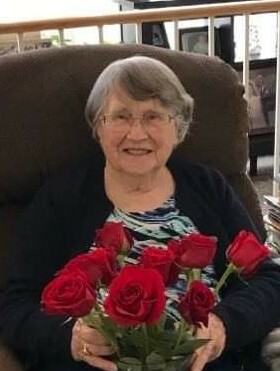 Agnes was the 3rd of 6 children born to John and Lillian Steil. Agnes grew up on a farm near Muenster, SK. On October 19th , 1943, she married Henry Wiegers. They purchased a farm in Burr, SK where they lived for 23 years. They raised 13 children on the farm with no power or running water. Life was hard on the farm but full of laughter and love. Agnes had a huge garden and did a lot of canning and preserving for the winter.

In 1967 they moved to Saskatoon with 10 of their children still at home. Agnes got them all enrolled in school and sports which were a big part of their lifestyle.

Agnes became a C.W.L member at St. Paul's Cathedral and was very active as secretary and president.

Agnes was a hard worker whose house was always open and welcoming to visitors. There was always coffee and often cookies on hand to share with guests. All this and Agnes managed to keep a houseful of children under control.

Family and religion were of the utmost importance to Agnes. She enjoyed camping, fishing, playing cards, crocheting, socializing and travel in later years. She rode Otter Rapids, went parasailing and ziplining, played golf, all after the age of 70.

In the fall of 2013 Agnes and Henry moved to the Palisades senior home in Saskatoon.

Agnes was predeceased by her husband Henry of 73 years, her parents John & Lillian Steil, 2 sisters Ruth and Elizabeth, 2 brothers August and Johnny, her half sister Helen, adopted brother Stan and grandchild Jason.

Father Kevin McGee will preside. In lieu of flowers, donations may be sent to St. Mary's parish.

Thank you to the nursing staff on unit 5200 at RUH for the excellent compassionate care given to Agnes.

We request you wear a mask for the service. Masks will be available at the church entrance.

Share Your Memory of
Agnes
Upload Your Memory View All Memories
Be the first to upload a memory!
Share A Memory