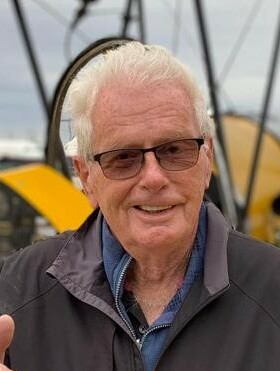 It is with great sadness and heavy hearts that we announce the passing of John Huxley Richards, age 83. After a long and wonderful life John passed away peacefully with family by his side, at Royal University Hospital June 1st, 2022.  John was born March 2nd 1939 in North Wales. He was the youngest of three brothers. When his mother died of tuberculosis he was 3 years old, his father later remarried and his sister came along a few years later.  At the age of 19, due to British conscription, John joined The Royal Army Service Corps where he served his country in Malaysia. After completing his National Service he returned home and met the girl down the street Pamela Metcalfe.  John and Pam were married          July 2nd, 1965 and had two children Lesley and Michael.

In 1976 the family immigrated to Canada and made a new home in Watrous Saskatchewan.  John enjoyed many years of work at the Colonsay and Lanigan Potash mines as a journeyman welder. In 2002 his loving wife, Pam, passed away from ovarian cancer. After Pam’s passing John continued to work and was introduced by mutual friends to Dianne Reithmeier.  John and Dianne married April 7th, 2012 and together enjoyed many years of golfing and camping. They were active in the Good Sam’s Sun Seeker Travelling Club and enjoyed visiting with family and friends.  In 2018 they decided to sell their home in Watrous to build a home on a lake front lot at Blackstrap.

John was a handyman who was able to fix anything. He loved card games and family gatherings. To know him was to love him and as his granddaughter Shaelynn would say ‘Grandpa was always very kind to everybody, they don’t make people like him anymore’

A celebration of John’s life will be held at a future date where all that knew and loved him are invited to share in fond memories.

Share Your Memory of
John
Upload Your Memory View All Memories
Be the first to upload a memory!
Share A Memory