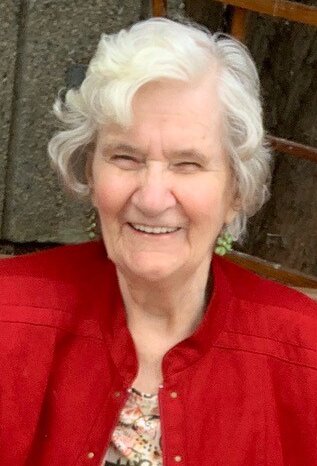 To Watch the recorded version of Leona's service click on this link:  http://video.ibm.com/embed/recorded/132022846

It was 1931, the same year Canada finally became a Soverign nation, and Leona Marjorie Rowland was born to Pheobe and Harry Rowland in Saltcoats Saskatchewan.  If you think about all that she would see in her lifetime you can understand how Leona learned to be adaptable in her long life.

Growing up in the 30’s taught her some valuable skills.  Her older brother and sister were grown and gone, leaving Leona a bit lonely in her childhood.  Consequently she learned to love the company of animals, especially dogs and cats, reading, and music.  The radio provided entertainment and comedy for a young girl, and a big old Maple tree served as an escape to read books and dream of far away places.

She was a cute, blonde, shy child who made up for that shyness as an adult.  On the weekends neighbors gathered in each others kitchens to play cards and socialize.  There were dances on the weekends and Leona honed her skills by learning ALL the dances, square dance, waltz, fox trot, and even the Jitter Bug.  She became a really proficient dancer.

At the young age of 19 her Dad died and Leona and her Mom Pheobe moved to Yorkton.  She took a dressmaking course and got a job working for the Singer Sewing Machine company.  She sold machines, parts, patterns and did some repairs too.  Leona was very good at her job and she loved it.

The inevitable happened, she met a dark haired blue eyed man named James Richards.  Their first date was in 1951 to the Saltcoats fair and three years later they were married.

She and “Jim” proceeded to have 4 children, Garth, Raymond, Russell, and Sherry.  Through hard work, determination and making do, Jim and Leona bought their own farm in the Crescent school district and built a brand new house in 1966.  The new house was heaven for her, she was thrilled to have a furnace and running water to make her life a little easier.

Leona enjoyed being on the farm and when they finally retired it was difficult for her to leave her friends and the life she knew.  Jim wanted to be where the action is, so they eventually moved to Saskatoon.

In the end Leona learned to enjoy her move and her retirement.  Those years were filled with travelling, visiting and being very active in their new life.  Eventually James and Leona moved to Luther Tower Retirement home in Saskatoon and once again made a new life and many many new friends.  They played games, participated in all the dances, and many concerts, and events at the tower.

Leona found things she enjoyed too.  She joined the Western Development Museum Singers and really shone with the jokes and stories she told their audience.  She was very involved in the activities at Luther Tower, helping with the recycling, movie night, food bank and generally participated in whatever was going on there.

In 2017 James passed away.  Leona showed us what her young life taught her, adaptability and moxy, and she made a new life for herself once again.

She still loved to play games, especially marbles and she wasn’t above bragging a bit if she won.  She was a very thrifty lady but never with her kindness and generosity.  If you were her friend she was loyal and fun, attentive and trustworthy.  Leona loved people and being amongst them. What she loved the most was to laugh and be the cause of it.  She made a happy life for herself and she brightened the days of those around her.  Leona was always quick to tease and sharp with her wit, on occassion she lacked a filter which was a great source of entertainment for her family.  “Do you know what Mom said?” was often followed by peels of laughter.

Leona didn’t like to be serious or speak of her feelings much, but one thing her family knew was that she loved them.  She was especially in love with her Great Grandchildren, she even learned to use Snapchat on her iphone so she could see all the latest pictures of the little ones.  She learned to text as well so she could keep in touch better, a pretty great

accomplishment for someone her age.

Leona was deeply loved and we will miss her smile and little sayings.  She lived a long and full life, with friends and family around her.

One day she sent me a text message that simply said “Enjoy yourself - it’s later than you think.”  Wise words from a Great Lady.

Leona is predeceased by:
Her parents Harry and Phoebe (nee Oliver) Rowland
Her siblings Marion Cooper and Chet Rowland

Share Your Memory of
Leona
Upload Your Memory View All Memories
Be the first to upload a memory!
Share A Memory