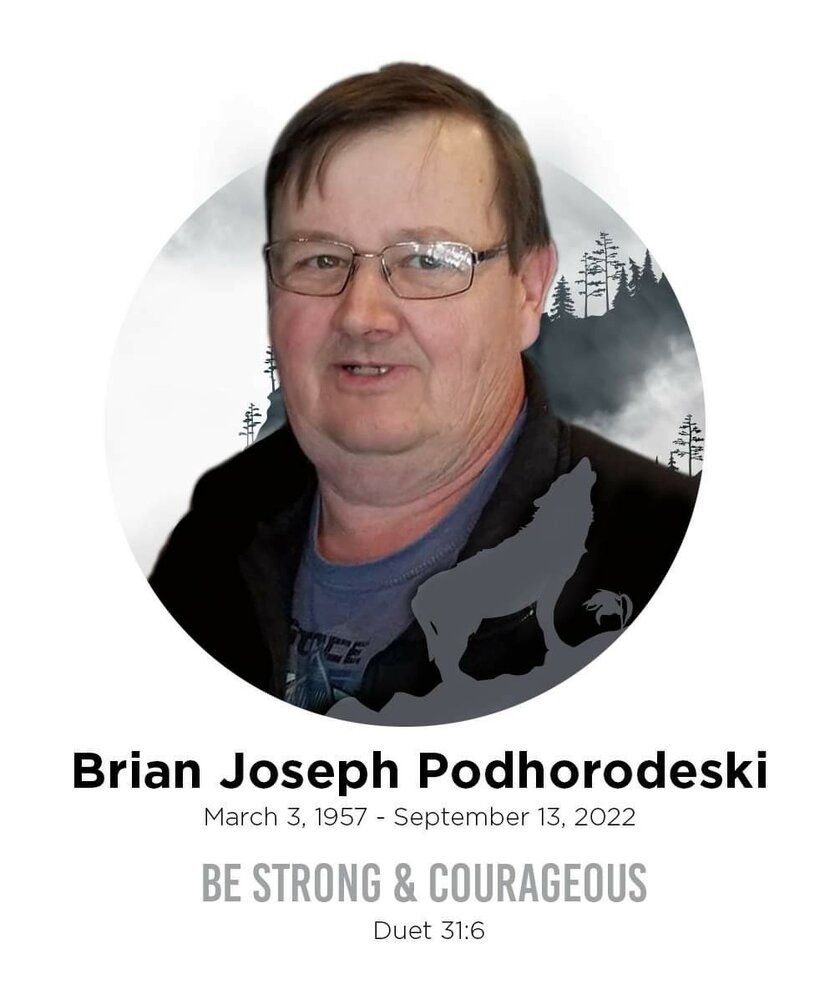 With great sadness, we announce that Brian Joseph Podhorodeski (65), Prince Albert, Saskatchewan, lost his courageous battle with cancer on Tuesday, September 13, 2022. He passed away peacefully with his family by his side.

Brian was born in Prince Albert, SK on March 3, 1957, to Joseph and Stella Podhorodeski. He was a loving son and best friend to his older sister Brenda. He was a humble man, and while his parents were at work, Brian spent much of his time with his grandparents, the late Sophie and George Lucasavich. He talked about his grandparents' importance in his life and shared stories of enjoying his grandmother’s unrivalled apple pie.

Brian’s long-standing career in carpentry began as a teenager when he went to work with his dad. In 1979 he married the late Judy Murphy, and with wonder, the pair welcomed their two children, Heidi and Shaun. Brian was wholeheartedly devoted to his children. He would drop anything to lend a helping hand to them. He was devoted to his family, and they always felt his love.

In 1980 new family traditions were established when Brian built a family cabin for his children just down the street from his parents at Emma lake. At this family landmark, the family has spent over five decades raising children and creating lasting memories. His legacy as a carpenter and father lives on as Shaun has taken ownership of the cabin and thoughtfully built on the family footprint at Emma Lake. As the family barbeques and roasts marshmallows, the echoes of his laugh will be remembered.

Brian worked in maintenance at Siast Woodland Campus until moving back to his passion for carpentry and construction later in his career. He had his hand in travelling work, lending his careful efforts in Safeway at Lawson Heights mall Saskatoon, building the new Mosaic Stadium in Regina, in Edmonton, at the new water treatment facility, and the new Credit Union at Rocanville. He’s also had his hand helping his son Shaun at the cabin and his daughter Heidi with her deck.

Brian’s favourite animal was a wolf, symbolizing loyalty, strong family ties, friendship and protection. This echoes his impact on the world. He watched over his children and ensured they had what they needed without being asked. From keeping lawns mowed and snow shovelled to sending extra money for groceries in times of transition - his family never went without. He retired early, was a faithful friend, and enjoyed coffee with his friends or gardening in his backyard. He was a loving grandfather and could be seen hand-in-hand with his grandchildren, a helium balloon on their wrists. He also loved animals, especially his cat Mozo, who he spoiled rotten.

Brian is survived by his two children: Heidi Bochek (Bradley Evans), Shaun Podhorodeski and his beloved grandchildren, Avry Bochek and Laykin Northley. Also, his sister Brenda (Mike) Popil and their three children. He is predeceased by his parents, Joseph and Stella Podhorodeski.

Be strong and courageous. Do not be afraid or terrified because of them. For the Lord your God goes with you. He will never leave you nor forsake you. Deuteronomy 31:6. Like a wolf, he was brave and courageous in his fight against cancer until his final breath.

In honour of his generous and loving spirit, In lieu of a funeral service, donations can be made in his honour to the Prince Albert SPCA.

Share Your Memory of
Brian
Upload Your Memory View All Memories
Be the first to upload a memory!
Share A Memory