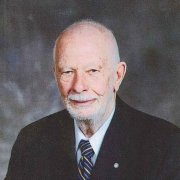 The Mass of Christian Burial will be celebrated at Holy Spirit Roman Catholic Church ( 114 Kingsmere Place) at 2:00 PM on Monday August 31, 2015. A reception will follow the service where friends are invited to enjoy a glass of wine or two and share their favourite memories of Jim.

We are very saddened to announce the passing of James (Jim) McCartan, just 2 days before his 87th birthday. He is survived by his children and families: Michael (Qiong and granddaughter Suzie (Timo)), Sheila Splawinski (grandsons Adam (Lynn), Scott (Allysha), and Sean), Daniel, Julia Jones (Doug and grandchildren Chris and Angela (Phil), great grandchildren Logan, Abby, and Madeline), and by his sister Margaret (Garnet) Adamson and families. He is also survived by his special and dear companion Doreen Meier. He was predeceased by his loving wife Jackie of 51 years in 2006, by his son David in 2013, by his infant daughter Joanne in 1963, and by his parents Jack and Hedwig. Dad was born and raised in Rosetown. He graduated from Mechanical Engineering at the University of Saskatchewan in 1951 and moved to Toronto to start his career. It was in Toronto that he met Jackie and they married in 1955. They moved to Saskatoon in 1956 where he worked for UMA, and in 1962 he started his own consulting engineering firm that eventually became McCartan Gaudet & Associates Ltd. He was a successful businessman and community leader, continuing to stay involved right up until his passing. He was in the Military, both in Toronto and Saskatoon, retiring from the Militia as a major in 1968, as Officer Commanding what was then known as 37 Technical Squadron, RCEME. He enjoyed many hours playing bridge at the Saskatoon Club, of which he was an active member since 1970. That same year he joined the Nutana Rotary Club for which he served as Director, and was President in 1982-83. He was a member of APEGS, serving as President in 1969-70, and receiving the honour of being named as a Fellow of Engineers Canada (FEC). He had many strong friendships that came about through his community connections. Dad was always very physically fit, having played several sports in university (where he won the McDonald Trophy in 1951 and he was inducted into the Sports Hall of Fame in 1987) and he continued to stay active his entire life. Dad grew a beard on a family holiday some fifty years ago and it became a distinguishing feature for him, particularly once it turned fully grey. He had a keen interest in wines and he enjoyed some great times with friends while collecting and drinking the wine. He had a very sharp mind and he was known for speaking it! Before and after retiring, he and Mom travelled to many places around the world, but they always loved Waskesiu. Several years later, he enjoyed many wonderful trips, social outings, and golf with Doreen. They were so busy together that we had to check with them first before planning any family gatherings. We are so thankful that Doreen came into DadÂs life and gave him much joy, love, and companionship. We are very grateful for the excellent care that Dad received during his time at St. PaulÂs hospital. In lieu of flowers, memorial donation may be made to St. PaulÂs Hospital Foundation (1702 20TH St. W. Saskatoon SK S7M 0Z9)

Share Your Memory of
James
Upload Your Memory View All Memories
Be the first to upload a memory!